I started to find ways to improve the Bachmann Fairbanks Morse H-16-44 about a year ago, then Rapido put out a teaser of a new locomotive model that was clearly a photo of an H-16-44 that had been blacked out.  At the New Haven Railroad Historical and Technical Association reunion last fall Rapido revealed the new locomotive, a New Haven EP-5 Jet!!!  I may have been the only one there that was disappointed!  Now that my hopes for a state of the art H-16-44 is dashed, I am looking back at the Bachmann model. 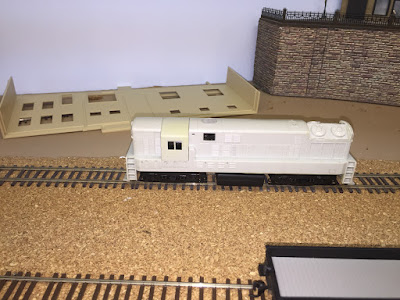 The photo above may just look like a stripped model, but it actually is sitting on the frame and drive train  from the Atlas Lowey style H-16-44.  This does a few things for the model: better drive, more detailed side frames, and DCC (with sound on the later releases).  I have an undercoated Atlas model to test the fit of the Bachmann shell.  The Atlas model comes with two sets of side frames, including the correct ones for the later H-16-44 model. 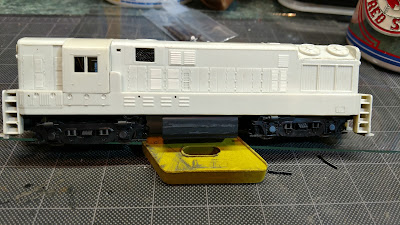 Fixing the body is a whole other issue.  The ends are a wrong and the vents along the sill are in the wrong place,  The doors on the fireman's side on the short hood should not be there as well.  The fuel tank is incorrect as well.  This leads me to decide if I want to do a heavy rework, or perhaps even using an Atlas Trainmaster shell and cut it down, or use the parts to upgrade the Bachmann model.  This is a much larger project then I was looking to do.  I may just detail and paint the Bachmann shell as is and push off the larger project down the line.  Maybe some body will actually make state of the art model by then.