I have been getting the hang of weathering with Pan Pastels and I really enjoy working with them.  I decided to do a set of the green FA's and they look a little more worn torn as they have not seen the paint shop in a number of years, unlike the McGinnis units.  The deferred maintenance is starting to take its toll on the units and oil leaks are staring to show up.  I used linseed oil to simulate the oil leak and full spillage on the models.  I learned that trick from a Mike Confalone Video.

On Monday Rapido announced they are producing Alco RS-11 in many variations: NH, PC, CR and LV are all in the first run among others.  They are also producing the MLW RS-18 and Tempo passenger train.  Both CN and CP RS-18's often made into New England on the Central Vermont and the CP lines.  All the locomotives will have the correct details for each railroad.

Of course I am only two detail parts away from finishing my Atlas RS-11.


I need to add drop steps and the brake chain guides.  I have already modified the cab window on the fireman side, added Hancock air whistles, steam generator vent and stack, train control box with the extended walkway over it.  I have also used modified an Atlas fuel tank form and Atlas RS4/5.  I may also replace the actual handrails with brass wire as the Atlas ones are very clunky.  I would retain the Atlas stanchions.  I only need one or two for the layout so I am on the fence on ordering one of those lovely Rapido units.
Posted by Jim Fellows at 2:55 PM 1 comment: 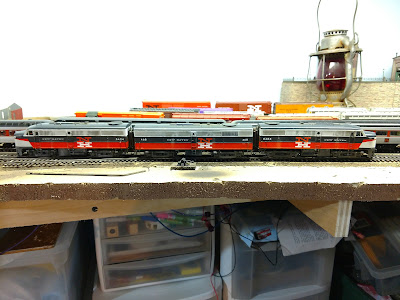 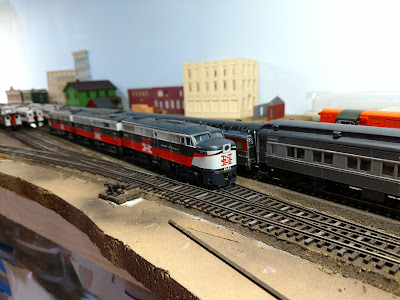 Posted by Jim Fellows at 8:10 AM No comments:

When the New Haven Railroad purchased it's new stainless steel cars after WWII, part of the order were for a 20 combination Parlor-Baggage cars.  They were delivered in two basic layouts, but these were later modified on some of the cars.  I am not sure if Rapido will make these cars and I really wanted a pair of them for the East Wind trains.  I decided to combine (pun intended) a Rapido car and a set of E&B Valley Car Works sides to create these cars.  I have some photos to show how I went about it. 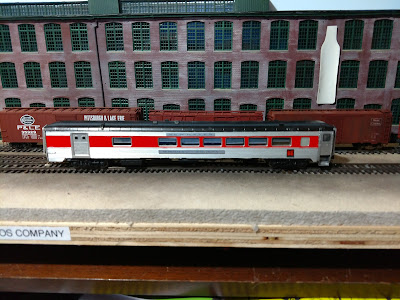 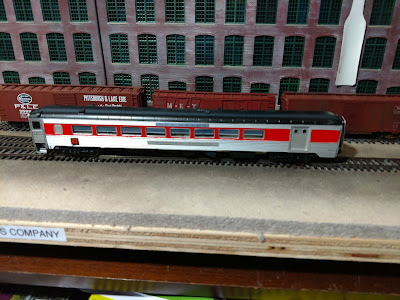 Posted by Jim Fellows at 7:23 PM No comments: