Cleaning up and finishing projects

The usable space on my work bench as continually was getting smaller and smaller.  I had to clean up and I now have room to work.  I have also dug out a lot of models that I need to build or get rid of as well.  I have decided to work on trio of ALCo’, two RS-3’s and an RS-11.  The RS-11 s a rebuild of one I built when I was in collage back in the late 1980’s.  When I originally built it, I did a decent job, but I did not modify the windows fuel tank, nor add the train control box.  I also used the in correct decals, using the extra serif ones made for the GP-9’s.   I was able to new shells for the hood and cab as well as grab irons from Atlas.  This time I did make the modifications to the cab windows  and add the  the train control box.  I also modified the fuel tank.

Here are the two RS-3 I am working on, more info in the near future. 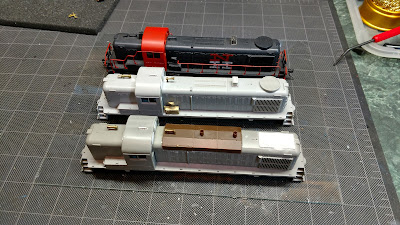